Fresh salad and
muesli for 40 cents.

Fresh salad and muesli for 40 cents.

A Pöppelmann story about a meal made from real wholemeal grain, classic salad recipes that have been honed to perfection over decades and the wholefood mission of our legendary boss. 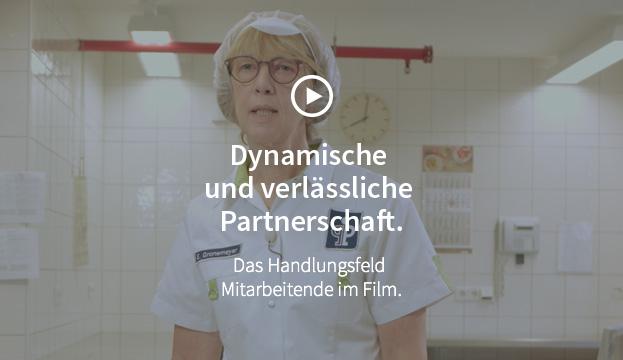 Those who fancy visiting the Pöppelmann kitchen team should head for plant 2 in Brockdorf. In a side wing of hall 23, a chrome worktop gleams. Today, the kitchen team are expertly portioning up carefully picked spinach leaves. Strawberries and goat’s cheese complete the mouthwatering salad bowls. It goes without saying that these also hail from Pöppelmann, produced by the food packaging specialist FAMAC®.

Together with Irmgard Uchtmann, Gerlinde Middelbeck and Mareike Hüdepohl, Head Chef Elisabeth Gronemeyer has been here since 6 a.m. Time is of the essence – all orders must be delivered to all 30 common rooms in the three plants in Lohne by 9.30 a.m. All employees can order a freshly prepared salad and a bowl of the legendary muesli – now with a simple click of their mouse. Digital muesli, you could say. The cost? 40 cents per portion.

The history of the Pöppelmann kitchen is also the history of Gertrud Pöppelmann (1924-2009). Upholding the health of her “Pöppelmen and women”, as the long-time company boss liked to call her staff, was always her top priority. During the mid-1980s, one aspect of health promotion in particular became her mission: healthy eating.

After talking to a teacher, the entrepreneur became aware of the nutritional principles of wholefoods. Gertrud Pöppelmann searched for more information, attended seminars and became convinced of the benefits. Then she decided to take her staff with her on her health journey – with the deepest conviction, as Hannelore Rudloff recalls. At the time, the native of Lohne was secretary to the company founder Josef Pöppelmann and Managing Director Karl-Heinz Diekmann, before playing a decisive role in the development of the company during her many years as HR manager.

“Gertrud Pöppelmann’s golden rule was, 'Fresh food is medicine',” she remembers. At the initiative of her boss, Hannelore Rudloff completed further studies as a health consultant. “In hall 1, we fitted out a small room in front of the metalworking shop as a kitchen where we prepared porridge and salads. We bought grain in the health food store and from wholesalers. In the evening, we would grind the wheat and let it soak overnight. The next morning, we would then prepare it with cream, fresh fruit and nuts,” she says, describing the early days.

This was joined by the Pöppelmann salads, which soon became legendary. The fresh food team made up of Hannelore Rudloff, Franziska Blömer, Hiltrud Rendo and later also Irmgard Uchtmann bought the ingredients from the local store, and used them to serve their colleagues raw as well as rustic food. “Some of our very first recipes, like our Athens Coleslaw, have survived to this day,” notes Hannelore Rudloff, referring to some of the classics from the Pöppelmann kitchen.

Now, three decades later, the Pöppelmann kitchen still exists, albeit a slightly more spacious version in hall 23. The principles have always remained the same: salad and muesli are prepared fresh every day. With regard to the muesli, however, the team has since moved away slightly from the principles of pure wholefood nutrition. “We leave the cream out now. Many people were worried it would make them fat,” explains Elisabeth Gronemeyer with a grin. “Nowadays, we mix in some quark, yoghurt and milk. By the way, we don’t use any sugar in our muesli. Raisins make it sweet enough. Some people like to stir in a little honey before they eat it.”

Of course, the Pöppelmann workforce have much more than salad and muesli to choose from. The company is supplied daily by local caterers, and food can be pre-ordered every week. To meet urgent requirements, a range of frozen food is also available. The company subsidises all meals as part of its comprehensive programme of social benefits. A fresh main meal from the Lohne butcher, for instance, costs staff 4.23 euros, and stew is available for 2.13 euros.

Daily food deliveries to all three plants involve a sophisticated logistical process, which ensures that the food is served and ready to eat on time in all 30 common rooms across the Lohne site. Would a canteen not be a better idea, for instance with a salad bar where everyone can serve themselves as they please? Some agree it would. Hannelore Rudloff objects: “We did think about a canteen earlier. But given the size of a company, one would probably not be enough. I still think that the current arrangement is the simplest and ultimately the most sustainable.”

She retired in October 2017, but still feels closely connected to the company. She is delighted to see that the commitment born out of those pioneering times continues to resonate in the company today. Although porridge has been replaced with muesli, it is still hugely popular among employees. The salads are also a regular lunch option for a large number of staff members. Head Chef Elisabeth Gronemeyer keeps a note of everything. In 2018 alone, a total of 115,080 PP bowls filled with muesli or salad left the kitchen in hall 23.

The healthy nourishment for a busy day at work is also popular among the young employees. One of the Pöppelmann muesli fans is 20-year-old Josef Ruholl, a tool mechanic in plant 2. “The muesli is really tasty, cheap and it fills you up,” he enthuses. The active footballer, who plays for the first-division Grün-Weiß Brockdorf men’s team, reveals that his favourite combination is muesli with strawberries. Most of the suppliers of the muesli and salad ingredients come from the region. Elisabeth Gronemeyer emphasises, “We use seasonal vegetables and source our herbs from organic retailers. The oils and vinegars we use are also high-quality premium products.”

Thomas Hannöver is another devout supporter of Pöppelmann’s fresh food from hall 23. The head of initial sampling in the Pöppelmann K-TECH® division, he is probably one of the fittest 'Pöppelmen'. He is the German champion of cyclo-cross and, in 2019, he topped the podium for the second time since 2016 in what is a high-intensity sport that demands everything of its competitors. “I always make sure my diet is full of high-quality nutrition,” he says. “I know that the food prepared in the Pöppelmann kitchen fully meets my needs.” Nevertheless, the cyclist sees food as just one piece of the puzzle in the comprehensive package of benefits that the company offers its employees. “We have many opportunities that everyone can take advantage of, from apprentices to managers,” states the cyclist. He considers the strong sense of cohesion that has developed as a result to be truly unique. He describes it as a “certain Pöppelmann feeling”.

The topic of nutrition is also gaining increasing importance amongst the company’s young employees. Discussions about not eating meat, vegan cuisine, livestock breeding and crop protection methods in the local area can often be heard during the lunch hour. Frank Lammers from Pöppelmann’s Human Resources department also believes this subject is very important. With regard to the food offered by the company, he believes there is plenty of room for improvement. “For the food provided by Pöppelmann to be worthy of the sustainable description, it must focus on the health of employees and not just on the origin of the dishes on offer. I would like to see a wider selection for employees who, for instance, follow a low-carb or low-fat diet from time to time for health reasons,” he says. From his point of view as HR manager, he adds, “Employees who consciously eat well will also be fit to work with the company for many years to come.”

Head Chef Elisabeth Gronemeyer, who regularly attends seminars together with her team, is aware of the significance of her field and the growing interest in it. “Young people today are much more nutrition-conscious than we ever were,” she says. This is not least apparent when she presents the Pöppelmann menu to new apprentices during the annual introductory week.

She looks at the clock. It’s time. After all, the staff will be looking for their muesli again tomorrow. Elisabeth Gronemeyer shakes the five-grain mixture into the funnel of the grain mill on the windowsill. The electric motor whirs as a bucket collects the freshly ground grain. She will leave it to soak overnight. Early tomorrow, they will refine it with apples, bananas, linseed, nuts and seasonal fruit – power food for a delicious Pöppelmann breakfast.

It is safe to say that we care!

We see occupational safety as a cornerstone of our responsibility for the health of our employees.

The high expectations we have concerning the quality of our work are inextricably linked to the high value we place on education.

An overview of our disclosure information as per the GRI standards.

Based on the GRI standards, we provide information and facts about the economic, ecological and social effects of our work.