Closing the loop: how Pöppelmann was inspired by Ellen MacArthur and assumed the pioneering role in responsible plastics processing. Since the beginning of 2018, TEKU® has been producing plant pots using recycled materials made from plastic packaging disposed of through household recycling. 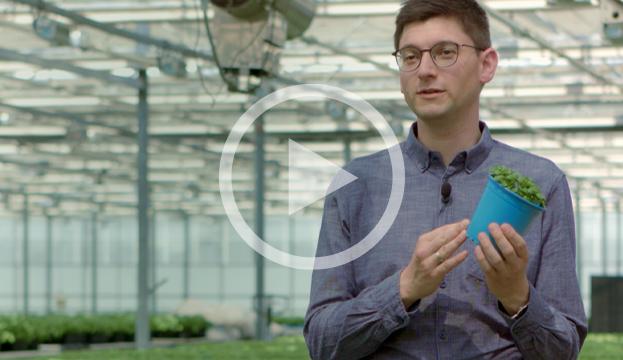 Why the colour blue? Why the name PÖPPELMANN blue®? Technology Scout Benjamin Kampmann smiles and tells the story of Ellen MacArthur. The young lady and the sea. Born in England, she was 24 years old when she became famous. In 2001, she competed in the Vendée Globe, the toughest single-handed yacht race around the world, and came in second place. For almost 100 days, she sailed alone on her yacht named Kingfisher as she tackled the non-stop regatta through the Southern Ocean. In 2005, she broke the world record and was appointed a Dame Commander of the Order of the British Empire by Queen Elizabeth II, thus carrying the title of “Dame” from then on. This was an accolade for an impressive performance: in 71 days, 14 hours, 18 minutes and 33 seconds, she sailed across more than 50,000 kilometres on the high seas, making her the fastest solo yachtswoman in the world.

This was Ellen MacArthur’s first career. Her second began in 2010 and is no less marked by her fighting spirit, passion and perseverance. She established the Ellen MacArthur Foundation. In order to stop litter pollution of the oceans, the foundation aims to accelerate the transition from a “linear economy” model to the circular economy model.

Circular economy means the raw materials used to make a product are not disposed of after use, but rather returned to the economic cycle wherever possible. After all, “We now have the knowledge and tools to build an economy fit for the 21st century,” explains her foundation's website.

But back to the initial question. So, why blue? Benjamin Kampmann explains, “The circular economy model promoted by the Ellen MacArthur Foundation distinguishes between two raw material cycles: the colour green denotes the biological cycle of organic raw materials, whilst blue symbolises the cycle of technical materials such as metal or plastic from production to recycling.”

PÖPPELMANN blue® is therefore the perfect name for the company-wide initiative that searches for solutions to close the material loop for plastic products. Pöppelmann Managing Director Matthias Lesch sees the everyday implementation of the concept of a circular economy as one of the key challenges of the coming decade. “We need to ask the right questions today in order to make sure we find the answers for the future of the brand in time,” he emphasises.

Long before PÖPPELMANN blue® even kicked off in early 2018, the company was already pondering how more recycled materials could be used in production. Our project developers have ample experience in the area. “At Pöppelmann TEKU®, we’ve been working with recycled material for more than forty years. Over 80 percent of TEKU® products for commercial horticulture have always been made using recycled plastic waste,” explains Head of TEKU® Product Management Günther Orschulik. Nevertheless, until the launch of PÖPPELMANN blue®, this almost exclusively involved production waste which, as post-industrial recycled materials (PIR), is relatively easy to reintroduce into the production of new goods. Because they are generally clean and sorted, recycling also pays off from economic perspectives.

PÖPPELMANN blue® wants to do more. After all, the actual challenge of plastic recycling lies in household recycling. Benjamin Kampmann explains, “The aim of our initiative is to close the material loop so that a plant pot, for example, becomes a new plant pot.” But it is easier said than done. The reason? As well as packaging made of aluminium, tin foil and composites, household recycling also contains many different types of plastic that are dirty and unsorted. For many items of packaging, this marks the end point of the linear economy. Currently, sorting systems can only filter a few types of plastic – known as “fractions” in trade lingo – for reuse as post-consumer recycled material (PCR), and the process is extremely complex. This is where the PÖPPELMANN blue® initiative comes in.

With a strategy controlled by the company’s top management: the PÖPPELMANN blue® steering committee is made up of shareholder and Chair of the Advisory Board Catherin Vitale, shareholder Maximilian Forst, advisory board member Dr Karlheinz Bourdon and Managing Directors Norbert Nobbe and Matthias Lesch. Various division representatives also participate in the regular committee meetings as PÖPPELMANN blue® experts. Shareholder Catherin Vitale emphasises, “The PÖPPELMANN blue® initiative has a huge strategic significance for us shareholders.” She is confident that the circular economy will be the future, especially for non-durable plastic products such as plant pots or packaging.”

Technology Scout Benjamin Kampmann is the project manager of the initiative. He can still remember clearly the beginnings of PÖPPELMANN blue®. “In 2016, I was commissioned to help TEKU® with the development of a recyclability concept. The focus was on the plant pot, since there was already a lot of experience with the use of recycled materials here.”

TEKU® Product Manager Günther Orschulik says that the innovative potential of a simple plastic pot for horticulture is generally underestimated by the general public. “At first glance, the product does not really give much away. But its special features lie in the detail.” In order to produce such a pot in a cost-effective and resource-saving way, it all comes down to a tenth of a gram in material usage and, later on, tenths of a second in production. Once they are with the customer, the pots would have to ensure automatic and fault-free processing on the modern potting machines. “Modern horticultural businesses are industrial companies with high levels of automation,” explains Günther Orschulik.

However, the crunch point lies elsewhere. In order to achieve the degree of opacity necessary for optimum plant growth, carbon is often added to the colour. But there is an undesirable side-effect. Carbon prevents the pot from correctly reflecting the test light of the near-infrared detectors in dual-system recycling plants. The result is that the type of plastic – which for plant pots, is usually polypropylene (PP) – is not recognised and the pot is classified as non-recyclable waste packaging. This means that a valuable and durable raw material ends up in energy recovery after just one use.

“This shows that the use of recycled materials is just the first step on the path towards a circular economy,” states Technology Scout Benjamin Kampmann. “In order to close the loop, the product itself must also be recyclable.” At the same time, the high quality requirements of customers must also be met – in this instance, those of horticultural companies. TEKU® Sales Manager Arno Zerhusen knows their requirements meticulously. “The plant pots must be able to seamlessly integrate into the automatic process. The material plays a decisive role here.”

Back then, the task was defined – and the search for new answers began. How should the pot be designed to make sure that sorting systems classify it as PP? Which recycled material would guarantee the required quality? And which expert partners could support the company on this path? Pöppelmann made initial contacts with the dual-system operator 'Der Grüne Punkt' (The Green Dot). A series of workshops and meetings followed. Finally, the concept of the blue plant pot emerged. And at this point, it was already clear just how decisive a role eco-design would also be in the future in the industry in order to close the material loop.

A huge field of work, only suitable for team players. “Progress can only be achieved together with all stakeholders, right down to retailers and consumers,” says TEKU® Sales Manager Arno Zerhusen. Legal requirements and social demands are only one side of the story. The Pöppelmann project developers know that in order to promote marketable solutions in terms of a circular economy, we have to be ready to fundamentally change our thinking – and to start all over again repeatedly. When production of the recycled pots began at Pöppelmann, completely new and unknown odours were released from the machine. The PCR material that was originally chosen releases vapours when heated and workers complain of the smell and headaches.

These were working conditions that no one would be expected to endure at Pöppelmann. Other recycled materials were tested and the production equipment was adapted. Finally, the solution was ready to go into production. In January 2018, Pöppelmann TEKU® took to the world’s leading trade fair for horticulture, IPM in Essen, to reveal the result: a plant pot in the striking colour Circular blue. Industry representatives were extremely interested. Including the GBZ Horticultural Centre in Papenburg. Its sales manager Andreas Brinker was impressed by the sustainable product concept, and soon thereafter supermarket customers discovered the blue plant pots on shelves with the kitchen herbs. This was soon followed by important certification: The pot in Circular blue fulfils the requirements for the Blue Angel and the RAL Quality Mark issued by RAL-Gütegemeinschaft Rezyklate aus haushaltsnahen Wertstoffsammlungen (Link: www.ral-rezyklat.de).

Success is a motivator. The new Packaging Act that came into force on 1 January 2019 now sets the framework. Project Manager Orschulik even sees it as an opportunity. After all, “The need for post-industrial recycled materials that are easier to process will increase. This will make the offer currently available to us in horticulture even scarcer. However, we are ready and have the technology to optimally process the available quantities of collected recyclables.”

Meanwhile, Sales Manager Zerhusen describes 2018 as a hugely successful start for PÖPPELMANN blue®: “We are industry pioneers in this area. Countless discussions with customers have shown us that we have helped to reach a decisive turning point. There is no doubt that the attitude of consumers must continue to change – plastic is neither waste nor a fundamentally bad material. On the contrary, it is a valuable raw material that is not only very suitable for recycling but also requires our responsible treatment.”

Not only at TEKU®: the first PÖPPELMANN blue® product to go into series production will soon be followed by more. The KAPSTO® division has already included plastic protective elements made of PCR in its range. And the Pöppelmann FAMAC® division is now producing packaging buckets, containers and boxes for the non-food sector as part of PÖPPELMANN blue®.

We deliver products with added value.

Our products and services are hallmarked by the highest quality. This pledge has become a core part of our PPx corporate guidelines. Our customers’ expectations are our quality standard.

The design of a product plays a crucial role in how the product affects the environment. This is why eco design, in accordance with customer requirements, is at the heart of our product design.

The design of a product plays a crucial role in how the product affects the environment. This is why eco design, in accordance with customer requirements, is at the heart of our product design.